If you are visiting Las Vegas, it’s all about the experience you can’t find anywhere else. Between the world-class dining, gambling, and special performances, Vegas delivers. But there are also attractions that not only provide a fun time for the whole family, but offer some cultural enrichment, as well.

As a crossroads between California and the rest of America, Las Vegas has built an amazing collection of museums that offer a glimpse of bygone Americana and other areas of curiosity.

Here are five of the best specialty museums Las Vegas has to offer:

You don’t have to be a “pinball wizard” to enjoy a trip to the Pinball Hall of Fame. It’s 10,000 square feet of lights, bells, sirens, bumpers, and balls was established as a way for the Las Vegas Pinball Collector’s Club to show off their wide collection of machines.
While most of the machines are from the 1970s and 1980s, the oldest models date back
decades farther, while the newest machines are from the 1990s and feature themes that
younger generations be familiar with. If you’re a pinball buff, you’ll find hours of enjoyment at this museum.

If your movie collection features names like DeNiro and Pacino, then The Mob Museum is for you. Built as a time capsule of organized crime and the brave G-men who worked tirelessly to take down gangsters, The Mob Museum offers a rare look into the seedy underbelly of an American criminal institution: the Mafia. You’ll explore exhibits that follow the mafia from its Sicilian roots to Las Vegas itself, with all of the juxtaposition of glamour and gore that has kept Hollywood and movie audiences everywhere enamored with the with tales of the mob. Static and interactive exhibits abound, giving you an up-close look at the lives of gangsters.

Unfortunately, you won’t be able to try out the display guns. For that, you’ll need to visit Machine Guns Vegas, where you can try out popular law enforcement firearms and real machine guns on their highly safe Las Vegas shooting range. For fans of The Godfather, it’s an offer not to refuse.

At 11,000 sq.ft. and already reportedly haunted, this museum is a perfect fit for Zak Bagans’ collection of the paranormal. As the collection has grown, so have the reports of strange apparitions and occurrences. One of the most famous pieces in the collection is the Dybbukbox, a haunted wine cabinet with a storied past that was the inspiration for the movie The Possession.

If you’re frightened of things that inexplicably go bump in the night, this museum may not be for you. However, if you can’t resist the thrill of rubbing shoulders with the alleged supernatural, The Haunted Museum may make you leave believing that ghosts are indeed real. 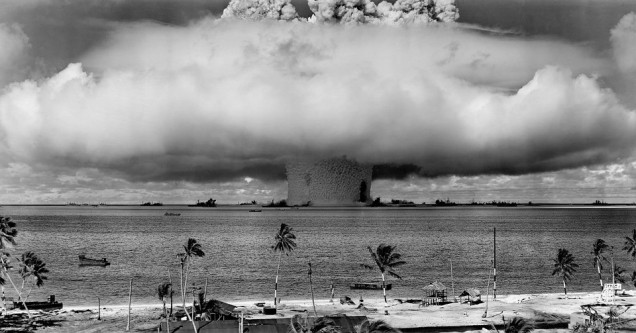 Relive prepping for the Cold War with a trip to the National Atomic Testing Museum. An affiliate of the Smithsonian, this museum contains relics of the burgeoning atomic age, some of which come directly from the nearby Nevada Test Site for military weapons.
Features include inactive nuclear weapons, geiger counters, pop culture materials from the 1950s to present that are associated with nuclear war, and a simulated nuclear test that lets you experience a virtual version of an atmospheric nuclear test. Of all the museums on the list, it’s safe to say this one will be a blast.

Las Vegas is known for entertainment, and there has never been a modern music star bigger than The King. If you’re an Elvis Presley aficionado, be sure to put the King’s Ransom Museum on your to-do list. Packed with the Presley’s own property, you’ll see clothes, cars, and accessories that are instantly recognizable from his movies, performances, and public life.

This multi-million dollar exhibit may not be Graceland, but it’s the next best thing. It’s a great way to honor and remember the King of Rock ‘n Roll. Elvis played 636 sold-out shows at the International and Las Vegas Hilton from 1969-1976. A museum to his rock-and-roll majesty was definitely in order.

Meet the Author:
Jordan McDowell is a writer, aficionado of American culture, and second amendment rights advocate. As a proponent of responsible gun rights nationwide, he writes about recreational hunting, American history, and the latest developments in state and federal firearms legislation.

Vacationers planning their next getaway should consider the following five destinations, where they can enjoy the individual delights of each city but also aim to replicate past exploits, both fictional and non. These five hotels offer visitors the chance to stay in suites previously used by the rich and famous. Whether you’re a movie buff or a political junkie, there’s something for everyone in these locations!

1) Las Vegas, NV – The Fantasy Tower at the Palms Place Hotel and Spa

Located just south of Sin City’s famous Strip, the Palms Place Hotel and Spa offers deluxe amenities like a spa and hammam with over 20 treatment rooms, private garden lounges, and tennis courts. Its main draw, however, is the Fantasy Tower, a two-story guest villa partially designed by Hugh Hefner. Accessible by a private glass elevator, the 9,000 square foot space boasts three bedrooms, multiple bars, a glass-walled jacuzzi and swimming pool with a terrace. The real Hef-style luxury comes from the media room for film screenings and indoor waterfall, so high rolling travelers looking for a glamorous “home base” while visiting Vegas should definitely consider spending their money here – champagne buckets and personal butlers, included.

2) Miami, FL – The Everglades Suite at the Biltmore Hotel

There’s not a bad room in this historic hotel, just south of downtown Miami, but the crown jewel and biggest draw for history buffs is the Everglades Suite. Infamously nicknamed the Al Capone Suite due to the Chicago gangster allegedly living there while running a speakeasy out of the Biltmore in the 20s, the penthouse retains a glamorous retro vibe. On a less illicit note, presidents from Dwight D. Eisenhower to Barack Obama have also stayed in the suite while in Miami. Hand-painting ceilings and a baby grand piano add to the Jazz Age atmosphere, while the balcony overlooking the 18-hole golf course makes for a nice morning view. Between the world-class dining and the 600,000 gallon swimming pool calling your name, visitors to the Biltmore will have to force themselves to leave in order to explore Miami proper!

3) Palm Springs, CA – The Pretty in Pink Suite at the Palms Springs Rendezvous

This modern boutique hotel, located just outside downtown Palm Springs, is home to the Pretty in Pink suite, where Marilyn Monroe often stayed in the 1950s. The name doesn’t lie, so travelers who are Marilyn fans, or fans of the color pink, will be in heaven staying in the suite with its pink carpets, pink walls, pink sofa, and pink linen. Live the life of a 1950s screen siren by getting ready in the vintage inspired bathroom and taking your coffee in the retro chic kitchenette (complete with old school appliances). The room overlooks the hotel’s courtyard, a shimmering oasis featuring a pool to provide relief from the desert sun. Apart from the retro stylings, the hotel boasts amenities including breakfast every morning, cocktails and appetizers during happy hour, and an on-site massage studio.

The hotel itself dates to 1925, but millions in renovations have brought it firmly into the 21st century for a marriage of elegant style and modern flair. First time visitors to the nation’s Capital should certainly consider staying at this location, which is minutes from the White House, the Smithsonian and the National Mall. The Mayflower is the perfect option for presidential history buffs as well, as FDR stayed in room 776 in the months leading up to his 1933 Inauguration (and legend has it, dictated his “We have nothing to fear but fear itself” speech there), and Harry Truman called it “Washington’s second best address.” Amenities include the brasserie EDGAR Bar & Kitchen, and a Grand Ballroom, which has hosted every Presidential Inaugural Ball since 1925.

Fans of the movie Pretty Woman might recognize the Penthouse Suite, used as a backdrop for many iconic scenes from that film. The 5,000 square foot three-bedroom, four-bathroom suite carries a hefty price tag but it’s well-earned. It’s located on the private 14th floor of the Beverly Wing, accessible only by key, and boasts Swarovski chandeliers, marble mosaic floors, and floor to ceiling windows opening onto Rodeo Drive, where you can always wander to recreate Julia Roberts’ shopping sprees from the film. The nightly rate includes a personal concierge to cater to your every need.

This post was posted by The Hipmunk on Hipmunk’s Tailwind Blog on April 2, 2016.

If you are travelling, you need Travel Insurance

A preview and Toronto hangar view of the new WestJet Dreamliner, maiden flight this Friday across the Atlantic
New on my Blog - The Charm of Old Quebec City. It’s one of Canada’s gems in winter or summer. The historic district of Old Quebec City is a UNESCO heritage site. Link in bio...
NEW on my Travel Blog - Best time to visit New York City. Anytime is a good time in New York, New York. Check out my post with travel tips, link in bio...
NEW on my Blog - Christmas in Vienna. Vienna at Christmas is fabulous and bucket list worthy. Link in bio...
At the summer palace on a beautiful Sunday in Vienna...
More pics from a few of the various Christmas markets in Vienna...