Here’s a bit of a different post based on colours. Thanks to Julie @redheadtravels for the kind words http://www.theredheadedtraveler.com and for nominating me to participate in “Capture the Colour”. It gave me a chance to go through my photo library and look at a few pictures from a different perspective. 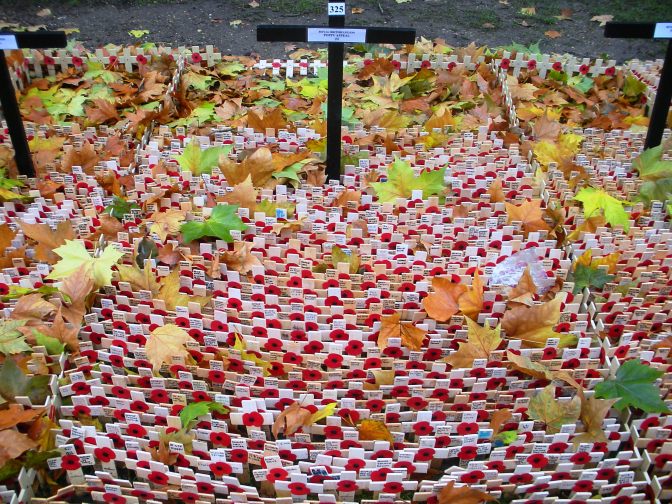 Last November, I was walking through the City of Kensington (London), looking for shots. The Palace, Green Park, Horse Guard, Big Ben, etc. Got those photos and then some. I walked up to Westminster Abbey and was taken aback by the poppy display on the grounds. The annual Field of Remembrance has over 350 plots with each cross and poppy representing a fallen soldier from the British Armed Forces. An unfortunate showing of red. (I’m returning to London in September and will be doing a series of posts later in the month).

The Burj al Arab Hotel in Dubai is striking for its design and color. The morning light in the lobby brought out its vibrant colours and the yellow in particular. Between severe jet lag and the crazy buildings, Dubai is surreal. The photo was taken from the 4th floor in the morning after a very long sleep. My Post: Dubai- New & Old was picked for “Freshly Pressed” https://markstraveljournal.me/2012/08/07/dubai-new-old/ and appeared on August 9th.

GREEN – A Canal View of Amsterdam

I’ve been to Amsterdam 3 times (so far). On a recent trip to Amsterdam, I started out by staying in a boutique hotel near the Rijksmuseum. It was a totally different experience from the crowds of Dam Square and had me exploring the city like a local. There’s not very much park area but considering the cityscape, they do have a lot of trees lining the canals. I love the light and water reflection in this early evening shot. My Blog has an Amsterdam Series (4 posts). My favorite is about the Canals: https://markstraveljournal.me/2012/07/07/the-amsterdam-series-part-4-the-canals/

A jet boat ride on Muldrew Lake in Muskoka, Ontario, Canada started out at a frantic pace and then slowed down at dusk. The light started changing rapidly as night began to fall helped by some influence from the northern lights. My Post talks about Muskoka and the tradition and legendary cottage vibe that it has: https://markstraveljournal.me/2012/07/29/muskoka-canada-cottage-country-and-then-some/

WHITE – The Church in Seefeld, Austria

Seefeld, a 20 minute train ride north of Innsbruck, is one of my favorite places on earth. With the mountain views all around, you feel like you are in heaven. This white church, the Seekirchl, dates back to 1629, and is one where my father prayed in World War 2 (prayed for the end of the war). (Blog Post coming soon).

I’ve seen some great photos and entries but I’m not sure (via Twitter) who has already entered and who hasn’t. So, here’s my 5 nominees – it’s a bit of fun, do it if you want (or love to see your entry):